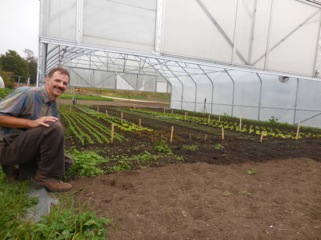 Like many growers these days, I’ve been searching for crops to grow in my high tunnel that will be profitable while giving the soil a break from the tomatoes, peppers and cucumbers that I often grow there. And after battling last winter’s record low temperatures with all-too-frequent propane deliveries, I decided to take a closer look at growing winter greens in an unheated greenhouse.

The authority on this subject is Eliot Coleman, who is growing winter-hardy vegetables on the coast of Maine with little to no auxiliary heat. His book, The Winter Harvest Handbook, contains a tremendous amount of valuable information – the kind of information that fills the mind of a lifelong, fastidious student of his craft.

All of the crucial specifics of his techniques are in the book – varieties, spacing, planting dates, days to maturity, frost protection, and harvesting and packing tips. Still, I felt like I needed to see his farm in person and meet him.

So, in late September, I made a pilgrimage to Eliot Coleman’s farm. When I arrived, I was welcomed by an apprentice and several volunteers who were very friendly and invited me to explore the farm on my own. The farm was beautifully kept and the crops were healthy (impressive for any farm in late September!)

Of particular interest to me were his rolling greenhouses. Eliot co-designed these with Rimol, the greenhouse company that I will work with, beginning in October. He uses these greenhouses to protect a rotation of high value crops, alternating with cover crops when the structure moves to another paddock. It is a very clever system where the uncovered areas of ground within the rolling greenhouse’s range are used for staging crops that will be covered later in the season.

When I talked to Mr. Coleman, we spent a considerable amount of time discussing soil health and techniques to build soil and to rejuvenate damaged soils. Like many vegetable farmers, Eliot rotates his production fields, and rotates chickens and cover crops with his cash crops. He plants white clover and grasses in fallow paddocks (which average 2 acres), keeps them mowed between 3 and 8 inches tall, and moves his chicken tractors every day. Every fourth year, he crops the paddock.

Using this technique, he has very little weed pressure (grasses crowd other weeds out and chickens eat weed seeds). And I can also attest to very little pest pressure (the chickens eat the adult insects, larvae and their eggs), or disease pressure (besides the nutrient from the chicken manure, the clover adds nitrogen to the soil and decomposed grasses add significant organic matter). The brassicas had very little worm damage and the alliums had no thrip damage. Eliot also told me that over the last 12 years, they have increased their topsoil layer from 1.5″ to 4″ deep. He regularly plows in locally collected seaweed, shells from local fisheries and elemental minerals to fortify the soil for many years to come.

I left with the convictions that vegetable production can be profitable and restorative, especially when season extension techniques like row cover and high tunnels are employed. Winter greens in an unheated greenhouse are very possible anywhere, and they have great profit potential. And as Eliot reflected as I left, “If I can do it here on the coast of Maine, you can do it anywhere”.